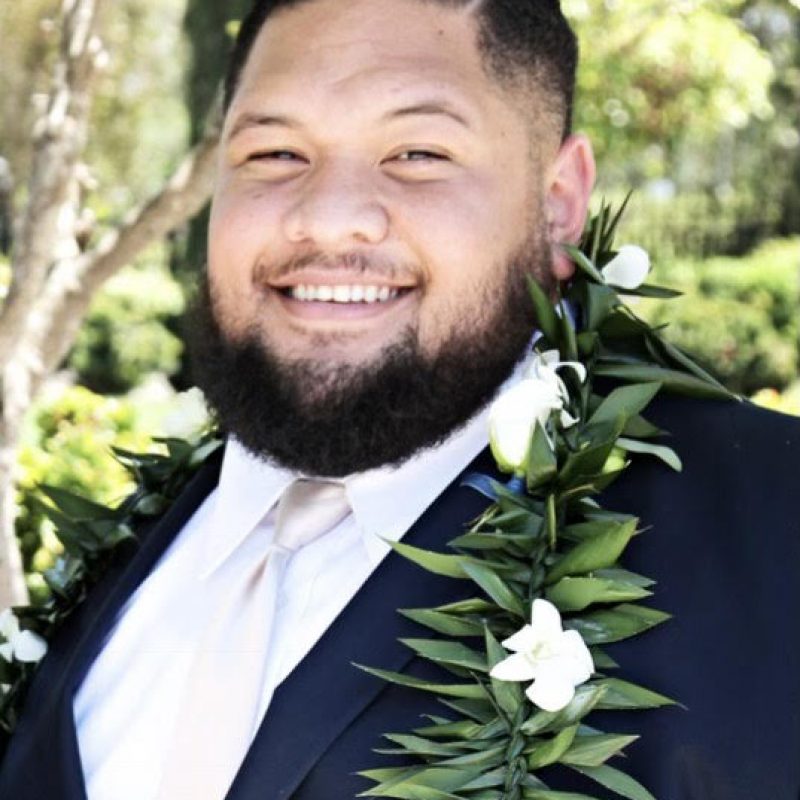 Reginald Phillip Crichton Sr. was born in Pago Pago, American Samoa on January 1, 1992. He returned to his Father in Heaven on June 12, 2021.  Reggie leaves his loving wife, Elizabeth, and two children, Reginald Jr. and Lilieni.  He will also be missed by his Father and step mother, Clarence and Oreta, his sisters, vast extended family and friends.

The experiences of Reggie’s childhood and youth shaped the character of the friend, son, brother, husband and father he later became.  The loss of his mother and sister in his teens instilled in him the importance of loving and nurturing every relationship in his life, because he knew how short this life can be.  He hated contention and he knew all too well that you can never be sure when you might have your last words with a loved one.  His smile could warm the heart of a stranger and brought comfort to all who had the privilege of associating with him.

Reggie was an athlete and he excelled at every sport he tried his hand at.  He loved rugby, soccer, basketball, and football.  He played football through high school and received a full ride scholarship to play for New Mexico Military Institute.  After two years of college Reggie made the pivotal decision to prepare to serve a 2 year full time mission for the Lord.   He was called to labor in the Louisville, Kentucky mission from 2012-2014.

Reggie was always the “favorite” missionary wherever he served.  His companions were always so excited when they were assigned to serve with him, because they knew the members of the Church wanted Reggie in their home,  so they would be fed every night.  During Reggie’s time on his mission he developed a deep love for the South and the hospitality the people there showed him.  Even at 29 years old, when he would get very tired, you could detect a slight Southern accent lingering from his days in Kentucky.  The opportunity to share the Gospel and teach the Plan of Salvation and the blessing of Eternal Families deepened Reggie’s already strong faith and trust that he would see his Mother and Sister again one day.

Shortly following the conclusion of his mission, Reggie moved to Anaheim, California to live with his Aunt and look for work.  It was during this time that he met his future wife, Elizabeth Powell.  After several run ins with each other at young adult church activities, and at the encouragement of mutual friends, Reggie finally got the guts to ask Elizabeth out.  They didn’t spend much time apart from that day forward.  Reggie won over every single one of Elizabeth’s friends and family members with his dazzling smile, warm countenance and his ability to keep Elizabeth’s attitude in check.  Elizabeth’s Mom liked the last attribute the most.

After a year and a half of dating, Reggie and Elizabeth were sealed for time and all eternity in the Newport Beach, California Temple on June 16, 2017.  As newlyweds they lived in Southern California for a short time, then relocated to South Salt Lake, Utah.  In marriage, Reggie lived by the principle of “never go to bed angry”.  The one time he did, he dealt with a sleepless night and a miserable following day until he could talk to Elizabeth and put the contention to rest.  He never let it happen again.

Reggie stepped into the role he was born to play when his son, RJ was born on December 26, 2018.  Reggie truly loved being a father.  He mastered changing diapers, curing an upset tummy, and snuggling babies into a deep sleep. When his daughter, Lilieni was born on December 4, 2020 any tough exterior he had tried to maintain melted away to expose his tender softness for his little girl.  He was the sole provider for his family and took great pride in caring for his wife and children.  Reggie could often be spotted at the park with both kids pushing the swing for RJ with Lili in his arms.  He was a full time wrestling companion for his son and could quickly transition to dancing with his daughter.  He found deep joy in the family he had helped create and had a stewardship to protect and provide for.  In February 2021 Reggie and Elizabeth purchased their first home in Tooele, Utah- a goal Reggie had planned for and worked towards for years. He was so proud of this accomplishment and loved welcoming friends and family there. His love can still be felt within the walls of that home.

Falling just behind his love for the Savior and his family came Reggie’s passion for cars.  He never trusted any mechanic and did his own research so he could make any needed repairs himself.  He never stopped his love of sports and he could often be found playing pick-up games with friends, nephews, and even strangers.  Reggie had a deep appreciation for technology and always wanted the newest tech he could get his hands on.  Reggie loved life, and you couldn’t help but soak up a little of that love and joy when you were with him.

Reggie left this world so much sooner than his loved ones had planned on.  He often referred to himself as “iron man” and considered himself invincible.  The car accident that took his life has been a tragic reminder of how fragile and short life can be. We are so grateful he lived each day fully and was a light to those who knew him.  While his spirit is separated from his body for a time, it is a blessing to know he has been reunited with his mother and sister.  His goodness and joyfulness can be seen in the faces of his beautiful children.  We find comfort in the promises of eternal families and know we will see him again one day.

To order memorial trees or send flowers to the family in memory of Reggie Crichton, please visit our flower store.