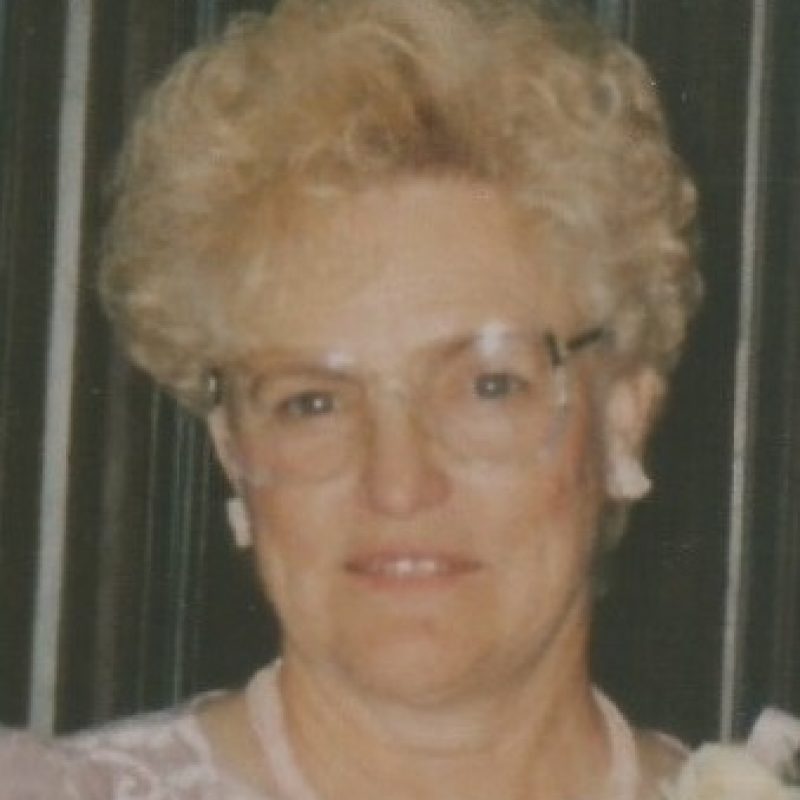 Melba Earlene Critchfield English was born October 25, 1936 to George and Melba Critchfield, in Oakley, Idaho. She was the 3rd of 11 children.

Earlene lived with a happy and positive attitude, which carried her through life’s challenges. Earlene was not one to complain. If there was something hard to deal with, she met it head on and worked until she got it resolved.

She loved life and she loved her family. Earlene was respectful to her parents and did her best to honor them by following their teachings. She was always willing to do whatever she could for them. She was loyal to her parents and to her siblings. She never outgrew the need for that Life association.

Her children gained this trait from their mother. They have worked together to meet the needs of their mother and to fulfill the desires of her heart. They have gone above and beyond any expectations 1st in bringing their mother to Utah in June so her siblings could see her one last time and 2. To bring Earlene back to Utah for this funeral service so her siblings could express their love to her one last time on this side of the veil.

Earlene was born left-handed. When she started school, the teacher insisted she use her right hand. Earlene has several grandchildren and great Grandchildren who are left handed, she felt they inherited this from her.

Earlene had many friends throughout her life. To know Earlene was to love her. Growing up she had 3 best friends, LuAnn Fowles, Rose Okleberry, and Vera Mills.

Earlene has always been a hard worker. She was never one to waste time. As a child she helped on the farm. One day she and Ross were herding cows along the ditch bank. They knew of a man who owed Dad $20.00, so they decided to go and collect from him. They convinced the man to give them the money and Earlene put it in a book she was carrying. They got back on Old Midge and started home. As they rode, she realized she had dropped the book. They retraced their steps, found the book but the $20.00 was gone.

Earlene was quick to help with the younger children. Clara said, “Earlene was like a second mother”. When our mother was busy, Earlene would always step in and meet our needs. Earlene was always generous with what she had. While in Oregon, Earlene invited several of her siblings to spend the summers with her family. Joan spent the summer of 1967 there. In 1970, Clara had just graduated from BYU and had a teaching position for the fall. Earlene invited Clara to come and together they spent much of the summer sewing a new wardrobe for Clara to begin her teaching career. Boyd and Leigh spent the summer of 1967 with them working for John.

In 1968 Earlene’s dad, our father, wrote a letter to her for her birthday. I would like to read just a paragraph from that letter.

“I will never forget what a good worker you were. One outstanding thing I remember about you was your willingness to accomplish things. It seemed when you worked for me outside or when you helped your mother in the house you were always thinking how much can I get done and not how long do I have to work at this. You were always so pleasant whatever you had to do. Very little complaining you did about your tasks or the clothes you had to wear. When your clothes didn’t fit or look too good you tried to make them look better and not complain that you didn’t have new ones. You took what we could offer and smiled about it. Maybe we could have done better if you had insisted but you enjoyed life in whatever surroundings you had which made life a pleasure for those around you.”

“I have noticed you were never afraid to try anything. I admire you because fear never has seemed to stop you from doing anything.”

Grandma Critchfield offered to pay for Earlene to take piano lessons. Earlene used the money instead to take dancing lessons. Later, Earlene taught herself to play the piano and many times accompanied people as they sang. Earlene loved to dance. She and a friend admired Leslie Caron, a French born dancer and actress. They wrote a letter to Ms. Caron and gave a sad story about a little crippled girl. They received a response with $5.00 and a picture of Leslie Caron.

Earlene not only loved to learn but she enjoyed sharing her knowledge and talents with others. She taught each of her girls to play the piano, to dance, and to twirl the baton. These lessons were complete with recitals and costumes.

After High school, Earlene moved to Salt Lake City to work. There she met John Van Yperen. They were married July 2, 1956. He was in the service and was deployed to Europe. Earlene returned to Oakley to work and save money to join John in France. When John completed his service they moved back to Oakley, Idaho.

John had previous training in sharpening saws. He learned that Oregon was a heavily forested state so they moved their family to Portland, Oregon. John was as industrious as Earlene was and together they built a successful business, Dutch Saw Works.

Over the years they were blessed with 6 children, Jeffery John, Dina, Lisa, Jaylene, Teresa and George Read. Earlene taught her children many things. She taught them the Gospel of Jesus Christ, she taught them the value of hard work, to be good citizens and neighbors and to be independent. Each of her children are a credit to their mother.

She has had a life- time of service in the Church. She held many positions, teacher, Relief Society President, and Primary President at age 70. I don’t believe she ever refused a calling to serve. She was always willing to serve wherever Heavenly Father needed her.

Earlene moved back to Orem, Utah and on Nov. 29, 1980 she married Jay Fowels. They served a mission to Morristown, New Jersey. They later moved to Idaho. After Jay passed away, Earlene moved to St. George and worked with Willa and Gwen on a mail route.

While serving in the Temple in St. George, she met Lysle English. They were married Dec. 3, 2006. They moved to Lysle’s home in Toquerville. They spent their days working in the yard and garden. They canned the fruit and vegetables that they grew and gathered nuts from his nut trees. They enjoyed going out into the mountains to find petrified wood that Lysle would make into furniture or clocks.

When Lysle passed away, Earlene bought a home and moved back to St. George. At this time she served a 2nd mission for the Church. This was a service mission called Daily Dose. She and another sister were companions. They served diligently helping immigrants learn English. She loved the people she was serving and did all she could to help them transition to this country and culture.

After sometime her children desired for her to live closer to them. When they approached her with the idea she was very willing. She sold her home and moved to Orem to a retirement facility called Treo. She was just across the valley from Jaylene.

As her health began to decline she moved to an assisted living home. When this facility was sold, her family moved her to Spring Garden. While living there the pandemic hit the United States and Utah. She tested positive for the virus, but never showed any symptoms. It was at this time that she went to Idaho to live with Teresa. Teresa tenderly cared for her for almost 11 months.

During her last few months it became difficult for her to eat and even swallow. She had some good days and some difficult days. Hospice had told Teresa that on Monday July 12, they would bring medication to help her relax. But true to form, Earlene handled this on her own and passed away on July 10.

One ship drives East and another drives West

With the selfsame winds that blow.

Tis the set of the sails

And not the gales

Which tells us the way to go.

Like the winds of the sea are the ways of fate,

As we voyage along through life:

“Tis the set of a soul

That decides its goal,

And not the calm or the strife.

Earlene never lost sight of her Eternal goals, no matter what winds of life she faced. She lived with Gratitude and contentment for what each day of her life brought.

Earlene’s life has been an example of many things to each of us. One of the last examples she gave to us is “Enduring to the End.” She left this earth with a strong love of Heavenly Father and the Savior, and an unwavering Testimony of Their Plan for each of us.

We love you Earlene!

Services will be available virtually via Facebook Live at: https://www.facebook.com/russonmortuary/videos/?ref=page_internal

Services will also be streamed on this page under the obituary at 3:30 PM.

To order memorial trees or send flowers to the family in memory of Melba Earlene English, please visit our flower store.