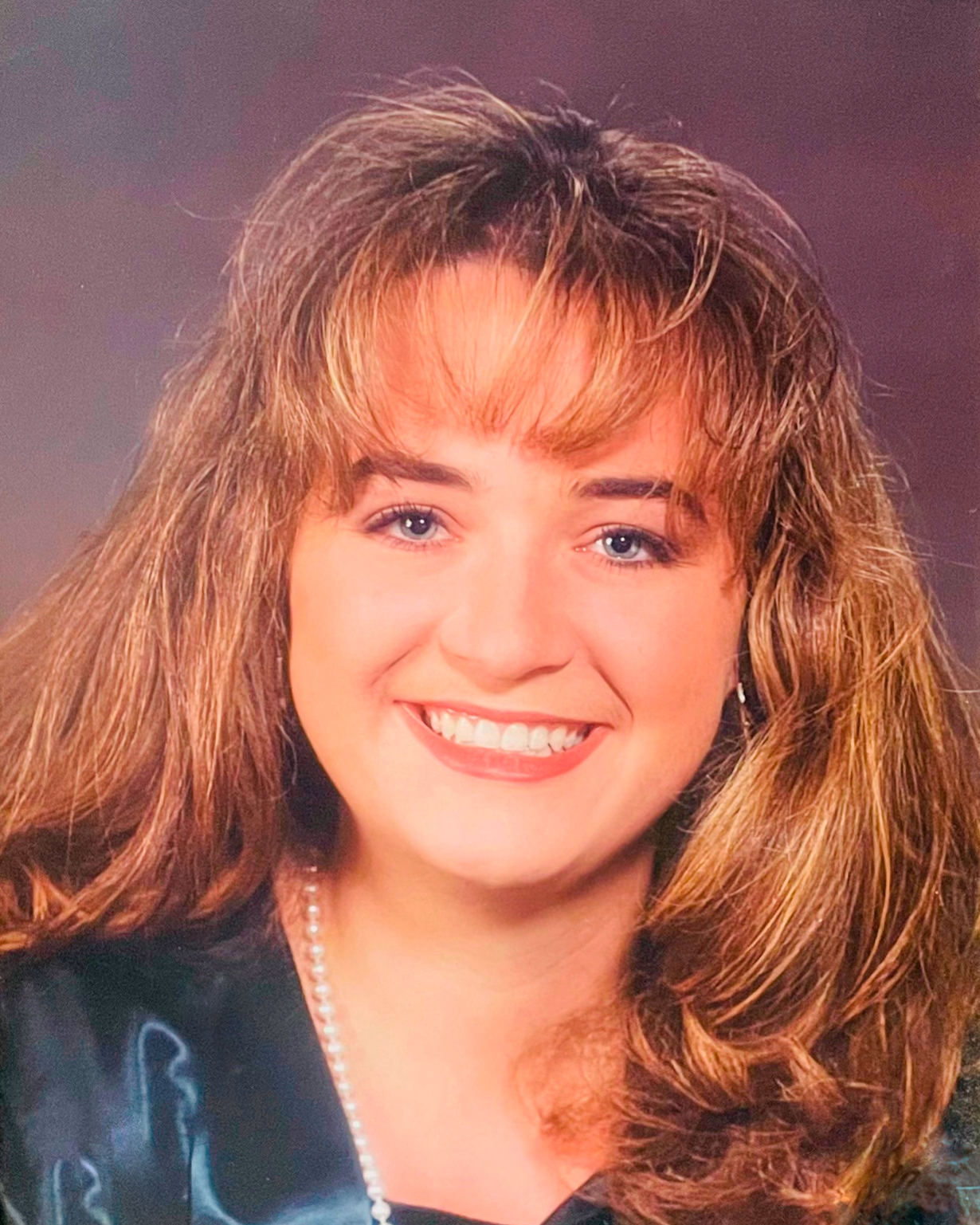 Our beautiful, beloved and cherished daughter, sister, second mom, best aunt, cousin, and best friend Melanie “Marie” Bryson returned home to the loving arms of her Heavenly Father on January 6, 2023 after passing away at home in her sleep.  She was found unresponsive after a routine afternoon nap.  Lifesaving measures were given by her mother and brother, as well as emergency medical personnel.  We miss her tremendously but find peace that she is out of the chronic pain and suffering she had endured for many years and rejoice in what must have been the most joyous reunion with her daddy.

Melanie was born February 26, 1977 at Cottonwood Hospital in Murray, Utah to Brent King Bryson and Karen Ann Crump Bryson.  She was fearless and brave, and always lived life to the fullest. She was very smart and dedicated to anything that she set her mind to. She was a warrior in her battle with health issues and dedicated to her family. She was so full of love and always up for an adventure. She cared about her friends, but she also cared about strangers and even animals too!  She used her strength, energy, wisdom and understanding to serve all those around her. She was a magnet and attracted people to her goodness.

Melanie was very athletic growing up.  She loved just about any sport!  She played AAA soccer, junior high volleyball, church basketball, and was the starting center on the junior high basketball team. If that wasn’t enough, she even took statistics for the men’s wrestling team.

Melanie was very intelligent.  She attended Oak Hills Elementary, Millcreek Junior High, and Bountiful High School.  She went on to attend Weber State University, Utah State University, UVSC (now UVU), BYU, and Stevens Henagar College. Melanie was a certified phlebotomist and medical coder.  Every time she got started a health complication seemed to derail her plans. She recently renewed her Nursing Assistant Certification as well as started (again) the prerequisites to nursing school just before the pandemic hit. She could have gone on to be a doctor if her health allowed it.

Melanie had many interests and that led her to many job opportunities and offers. She worked at Carmack’s Donuts, at a constable’s office, a dermatologist’s office, her dad’s school bus business, assisted on tumor boards at University of Utah, drew blood as a certified phlebotomist, president of her dad's Pioneer Daylilies, and most recently at her brother's real estate company.

Melanie loved animals and pets.  She was very good at taking care of all of them.  Growing up in Bountiful near the foothills we had exposure to plenty of wildlife.  She loved lizards, worms, deer, bunnies, salamanders, and the like.  We had pet dogs, cats, rabbits, turtles, guinea pigs, gerbils, and hamsters.  She helped raise over 36 cats throughout our childhood including 4 litters of kittens.  When she moved to Kaysville, she took 3 pug dogs with her.  Two belonged to Sharie and Jared but they both loved Melanie the most.  Jared finally gave up custody of his pug to Melanie and settled for weekend visitations.

In true Melanie Bryson fashion, she started a Facebook Group in Kaysville and Farmington for lost pets. There are currently over 1,000 people in the group. Last December alone she helped reunite 5 lost pets with their owners.  On another occasion we were on a family trip, and she saw a small bird that looked to have hurt its wing.  Melanie thought it would be a good idea to bring the bird into our hotel room.  She tried to make some mushed cereal for it to eat.  We had to leave for a while, and she left the bird in the shower.  When we came back, the bird seemed fine and flew away.

Melanie was always about helping others!  She researched people’s medical issues with them to try and help them find answers or relief.  She would reach out and help so many people including complete strangers.  She’d then develop many friendships through text, social media, and handwritten letters.  She would deliver or send gifts to children, help fund raise money, and hand delivery it all to many who suffered from illness and accidents. She worried about people deeply and wanted to help everyone she encountered.

She was our news lady. She was the first to tell us what was happening in the world.  She kept on top of things and helped us to be prepared and informed for whatever was happening near and far.  We will miss her updates and preparedness.

Melanie loved children!  She had a very special rapport with babies, children, young people, and young adults. She loved her niece and nephew, Grace and Grant beyond words.  She was the best aunt in the entire universe.  They called her mama, and we were happy to let her!  They were the highlight of her life.  We are so grateful for the memories we made together, and her legacy will live on in them!

Melanie helped raise many children.  The neighbor kids would run to her when she went outside.  She had pajama parties and movie nights with them.  She often decorated their homes for their birthdays and remembered them on special occasions.

Melanie was a planner and if you had a party, it was the best!  She threw the biggest baby showers you have ever seen.  The birthdays she threw for her brother and sister’s 40th’s were over the top – just like everything else she did.

Melanie could organize or fix anything!  She was a perfectionist, like her dad.  Things had to be done a certain way or she would “do them right”.  She was organized–even labeling what cords that went to the kids’ toys at Christmas!  We will literally be a mess without her!

She was mad when her brother got a tool set for Christmas one year and she didn’t!  So, the next year she received one as well!  When Melanie wasn’t too busy with work, or school, or organizing something in the house like a closet, the garage, or labeling clear storage bins from a recent event… you would find her outdoors.  Much like her father Melanie loved to work outside and in the garden.  She could spend all day weeding, trimming the bushes, planting flowers, and mixing her own version of garden soil. You could often find her on the sprinkler aisle at Home Depot helping other men find the parts they needed for their own homes.  They all thought she worked there.  In reality, she had the aisle memorized and was just helping out.  Most recently, Melanie fixed the home dishwasher and garbage disposal sink on her own.  She took them completely apart, took pictures as she went, fixed it, and then put it back together like new.  She wasn’t about to buy a new one if she could fix it!

Melanie was very private about her health issues and did not want people to know how bad she was suffering.  She much rather wanted to just help others, even in the midst of her own challenges.   During sophomore year of high school she was diagnosed with Chronic Fatigue Syndrome.  It was a very misunderstood diagnosis then.  A few years later, through many different doctors, it was discovered Melanie’s large intestine was nearly completely paralyzed (colonic inertia).  When they removed that section of her large intestine, they used staples to put her back together.  She ended up being allergic to the staples and bled internally for 8-9 months causing severe adhesions and scar tissue in her abdomen.  They had to do a revision of the same surgery a year later though this time she was hand stitched.  Many complications sprung from one abdominal surgery to another including one, in her early 20’s, where the doctor accidentally cut Melanie’s pudendal nerve in her lower abdomen.  This was irreparable and from that moment forward Melanie suffered from chronic abdominal pain and chronic peritonitis.  The rest of Melanie’s life was spent seeking for pain relief.  She saw doctors in California, Texas and her mom even moved her to Arizona for a year to seek out medical treatment at the Mayo Clinic.  She eventually found some relief with the invention of an intrathecal pain pump inserted into her abdomen that delivered pain medication directly to her spine in minuet  doses like an epidural.  Even with that she lived at a 6 or 7 on the pain scale, daily.  Unfortunately, things didn’t get any easier for Melanie.  In 2014 it was discovered Melanie had a pineal cyst in middle of her brain. We were fortunate to find world renowned doctor in Houston, Texas to open her skull and remove the cyst and save life.  However, as a result of that surgery, she had onset chronic migraines that would haunt her the rest of her life especially in the winter months.

Melanie loved the gospel of Jesus Christ and enjoyed serving those around her. She was the perfect peacemaker, listened to others, chose the right, loved her Heavenly Father and Brother Jesus Christ, and sought-after righteousness and truth. Melanie loved to write to the missionaries, and she especially loved it when she got letters back.  She loved being a member-missionary throughout her life.  She gave Books of Mormon out to many people and even followed up with people from all over the earth years after, just to see if they still had any interest in the Church.  She served in many Church capacities and leadership callings and touched many lives.  Some of her favorite assignments were in Relief Society Presidencies, teaching in young women's and relief society, Girl’s Camp, and helping people and family study their ancestry and genealogy as family history consultant.  In her single's wards she loved serving on the activities and family home evening committee.   Whenever she changed to a new ward she was quickly snatched up and loved to get to work organizing and planning things.   Just before the temples reopened to capacity, Melanie was able to receive her endowment!  What a crowning event in her life!   We know her work goes on beyond this side of the veil.

Unfortunately, Melanie had been suffering severely over the past 18 months with no conclusive results despite countless medical appointments involving: 33 emergency room visits in one year, dozens of different doctors and specialists in between (neurologists, immunologists, psychologists, psychiatrists, physical therapists, and speech therapists), MRI’s, scopes, pokes, and prodding’s.  She lost 90 pounds and was on a feeding tube for nearly 6 months.  She suffered from tremors, akathesia and paralysis.  One morning she woke up and was paralyzed from the chin down.  She had feeling but could not move.  36 hours later her body returned to movement.  She was completely bedridden and demanded 24/7 care for many, many months.  We are so grateful for the many hours we each spent with her.  The past two or three months we felt like we were witnessing a miracle before our eyes. She began to eat, and walk, and talk again.  We were even more excited the last couple of weeks as Melanie really rallied for the better.  We enjoyed a fantastic Christmas and New Year’s Eve together as a family.  We will cherish these moments as genuinely - true joy!  She is finally free from years of chronic pain and intense suffering.

The ward will be providing a livestream of the services using the following link: https://zoom.us/j/96050309085. Services will also be streamed live on the Russon Mortuary & Crematory Facebook page as well as on this obituary.

To order memorial trees or send flowers to the family in memory of Melanie "Marie" Bryson, please visit our flower store.