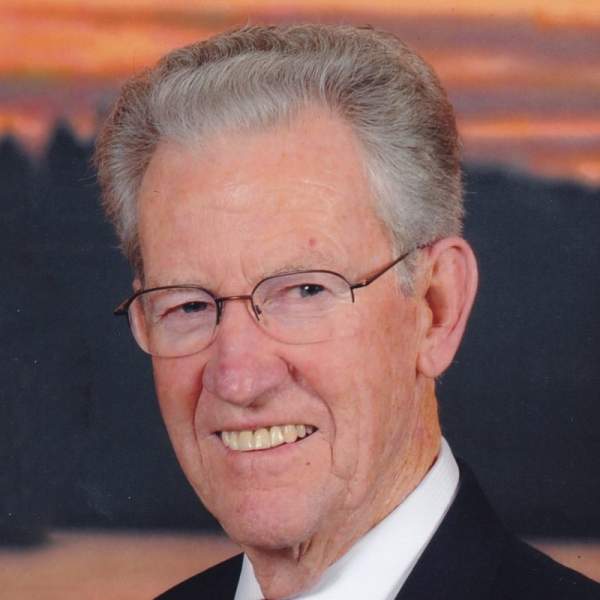 On November 16, 2021, DeWayne White “Jake” Simmons passed away after an extended illness with blood cancer.  He was born in Beaver Dam, Utah on November 30, 1929, to Marvin Yates Simmons and Aileen White.  Jake’s early years working on the family farm set the groundwork of a life of dedication, honesty, and hard work.  Jake was a faithful servant of the Lord Jesus Christ, fulfilling many roles for God and family.  He was exemplary in all that he did and was a shining example to all who knew him and loved him.

Jake attended elementary school in Collinston, Utah and graduated from Bear River High School in Tremonton, Utah in 1947.  He went on to graduate from Utah State University in 1955 with a degree in Business Administration.

In 1949, Jake married Jean Foster in the Logan Temple.  They were blessed with six children—Nathan (Debbie), Calvin (Cyndy), Gail Cheesman (Ross), Bret (Linda), Bart, and Angela Petersen (Kirk).  At the time of his passing, Jake had 23 grandchildren and 48 great grandchildren.  On September 10, 2009, Jean, passed away after a lengthy battle with Alzheimer’s.

Jake was preceded in death by his parents, one brother, two sisters, his day-old infant son Bart, son-in-law Ross, and granddaughter Ashley. On September 10, 2009, his loving wife, Jean, passed away after years of dealing with Alzheimer’s.  Jake’s great love for Jean was magnified by the kind, compassionate, tender care he showed to her during her illness

In Elder Robert D. Hales’ General Conference Talk, October 2016, he referenced Jake as an example of those who serve as caregivers. Elder Hales said,

I think of my neighbor whose wife was afflicted with Alzheimer’s disease. Every Sunday he would help her dress for Church meetings, comb her hair, apply her makeup, even put on her earrings. In rendering this service, he was an example to every man and woman in our ward – in fact, for the world. One day his wife said to him, “I just want to see my husband again and be with him.”

He answered, “I am your husband.”

And she sweetly replied, “Oh, good!”

Jake married Carol Anne Colvin Winter on January 28, 2011.  This joyous marriage brought two loving families together, including Carol’s children, Alan (Susan), Debra (Todd), Pauline (Calvin), and Cherise (Tracey).  Carol’s family has brought 20 more grandchildren and 35 more great grandchildren.  Grandpa Jake knew each of them by name and prayed for them daily also by name.  Jake loved these wonderful new family members, and they loved and cared for him in return.  They helped add the gold to the golden years of Jake’s life.

Jake proudly served his country in the Utah National Guard for fourteen years, rising to the rank of captain.  Dad was deployed twice – first to Korea during the Korean war, soon after their first child, Nathan, was born.  He was also deployed to Fort Hood, Texas for a year during the Berlin Wall crisis.

Jake had a successful 30-year career with Mountain Bell (which became US West).  He retired as a third level manager. His telephone career took him and his family to Logan, Bountiful, Midvale and Salt Lake City, Utah.  They also lived in Cheyenne, Wyoming and Boise, Idaho while Jake worked for the phone company.  After Mountain Bell, Jake went on to serve as the mayor of North Salt Lake for eight years. He also worked as a realtor.

As a member of the Church of Jesus Christ of Latter-Day Saints, Jake served in many positions, among which were Sunday School teacher, Elder’s Quorum President, Bishop, and twice in the Stake Presidency.  Jake and Jean also served a mission for two years at the Mormon Battalion Visitor’s Center in San Diego, California, where Jake was the Director. Their dog, Daisy, joined them as the first missionary dog there. Later on, Jake was also a temple worker for eight years in the Bountiful, Utah Temple.

Jake’s life was one of service, both spiritually and temporally.  His example of devout faith and hard work has passed on to the generations after him.  He is revered by his posterity as a man of boundless love, unqualified loyalty, and Christ-like acceptance. During his illness at the end of his life, he enjoyed visits with many family members, friends, and other loved ones.

We wish to extend special thanks to Elevation Hospice and in particular, to the nurses, Darian, Jeri and Juliata, who provided such selfless and generous service during these past difficult months.

To order memorial trees or send flowers to the family in memory of DeWayne White “Jake” Simmons, please visit our flower store.