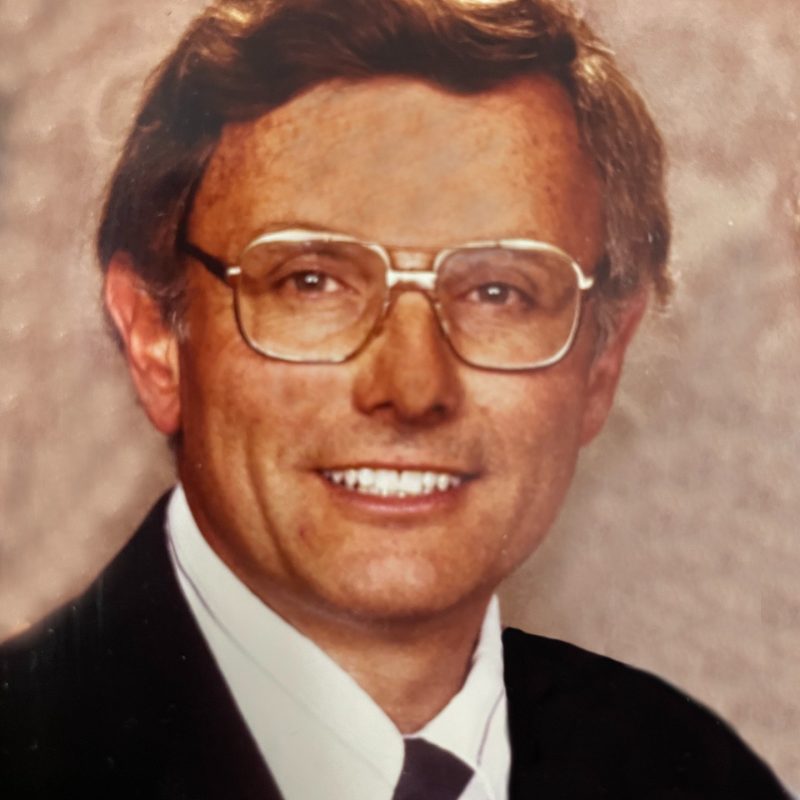 Our beloved father, grandfather and great-grandfather passed on to the eternities on January 9, 2022 just 4 ½ days after his eternal companion Gale left this life.  They were together for more than 64 years with no long separations and will now be together for the rest of eternity.  Dad was born on March 31, 1934 in Los Angeles, California to Lyndall May Smith and Hans Christian Breen Arntz.  His mother’s ancestry crossed the plains with the Mormon pioneers, but as this faith was not passed on in childhood, he joined the LDS Church at age 16 with his father as a convert.    Our father grew up in San Gabriel, CA not far from Santa Anita racetrack. He had a horse and a collie dog that he dearly loved, named Rusty. He got rheumatic fever as a boy and had to stay home from school for a full year as he was recovering. An interesting claim to fame was that he lived down the street from Elizabeth Taylor. He once threw a rock in the air that ended up hitting another boy even though that was not his intention and it caused him great stress and regret.

Our father grew to be a large man, 6’2” and big boned (like his mother) with size 13 feet. He became a football player who got a football scholarship to the University of Utah way back when they wore leather helmets.  He only played one season before he dropped out of school to go skiing at Brighton, his cousins ski resort. He was very intelligent and a philosopher. He thought deeply about life and right and wrong. He became less active in Church, maybe as a result of joining the Marine Corps or likely before that as a result of young restlessness. He then became a Marine and during his service witnessed the above ground nuclear testing in the Nevada desert.  His time in the Marines taught him to be self-disciplined, and very focused on duty. He taught his children to also know and do our duty.  He is the first in a line of BYU graduates and is a fan of BYU even though his first school was the U of U. He always loved sports.  Early jobs for our father included being a bookkeeper, surveyor, civil engineer where he helped design a park (we think in Glendale) and subdivisions, and then he became a home builder.  Our father might be considered a workaholic but we did not feel that he wasn’t there when we needed him. He was a good provider and after graduating from BYU became a ladder climber in his company Larwin, at that time the largest privately owned home building company in the nation, where he rose to the level of vice president. Economic recessions caused my father to have many misfortunes in his chosen profession. He was good at his job, but things outside of his control forced him eventually to become a U.S. Post Office mail carrier where he worked to be the best mail carrier that he could be.  This ended up being a great blessing to him as he received government pension benefits in his retirement.

He has always served with energy in his callings in the Church. He’s always been a dedicated and reliable home teacher.  Our father is not a highly expressive person of his feelings but he did write one of his sons a letter while he was on his mission to express some of his deeper feelings. He wrote that when his son was born he thought to himself: “This child will always be my son. Other’s can choose not to be my friend, but this boy will always, no matter what be my son.” He went on to explain that he had frequently been disappointed by friends, but that his son had never disappointed him and that he would always be there for him.  He was highly conservative in politics and could get irritated with other points of view but would generally listen to a good argument. In his later years, just like his father before him,  he largely lost his hearing and this has made him sometimes frustrated with others who don’t help him to participate in conversations.  Father’s frequently are known for their sayings. His oldest son, Mark, remembers a saying from his father: “If opportunity knocks, jump. How do you know that opportunity is knocking?  You don’t, so you just have to keep jumping.”  David Arntz is survived by his four children, Mark, John, Breen, and Kristi as well as 16 grandchildren and 17 great-grandchildren.

Services will be streamed live on the Russon Brothers Mortuary Facebook page and on this obituary page. The live stream will begin about 15 minutes prior to services.

To order memorial trees or send flowers to the family in memory of Christian David Breen Arntz, please visit our flower store.