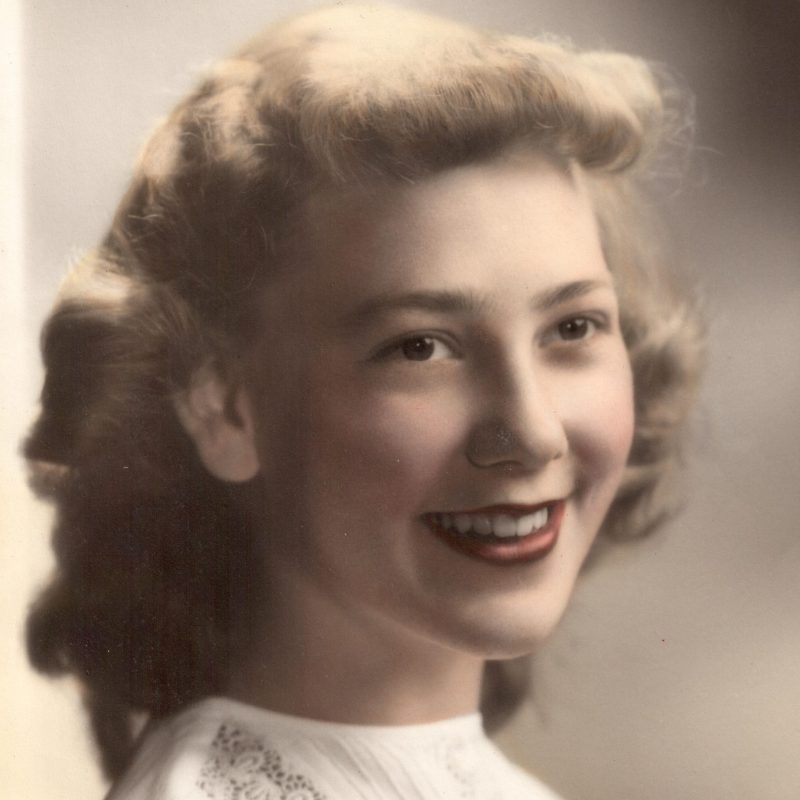 Helen Virginia Hall Nielson was a caring and devoted wife, mother, grandmother, great grandmother, aunt, sister, and friend. She passed away peacefully at home on August 10, 2022. She was 90 years old.

Helen was born to Evert Isidor Valentin Hall and Signe Marie Spjut in Salt Lake City. Both of her parents were born in Sweden. She spent her childhood in Salt Lake, as the middle child, surrounded by four brothers and sisters (Donald Hall, Ruby Thayne, Moreen Madson, and Linda Gee). Although her mother passed away when she was a youth, she stayed close to her siblings throughout her life. She was the last of them to pass.

After graduating from Granite High School, Helen worked at the Federal Reserve Bank in downtown Salt Lake. (Although she didn’t attend college at this time, she later attended Gulf Coast State College in Panama City, Florida.) She soon met Roger Nielson at a fireside held at her friend Lucienne Anderson‘s home. They fell in love and married on August 29, 1952, in the Salt Lake Temple. This month is their 70th wedding anniversary.

Roger was in the ROTC program at the University of Utah, when he received his Commission as a 2nd lieutenant into the Air Force, and was given his first assignment to Portland, Oregon.

They moved often during his years in the Air Force. Other assignments included Saudi Arabia, Germany (twice), Ohio (twice), Viet Nam, Florida, and Japan, with two of these years being without Roger. Every place they went, soon became home for them. They were unified in their desire to raise a happy family in the gospel, and to support each other. She was the one who kept the home fires burning. She willingly took care of everything on the home front, so that Roger could focus on his work and church assignments. She loved being his companion, and she loved being a mother. After 23 years of service in the Air Force, Roger retired as a Colonel and they settled in Bountiful, Utah.

In addition to her love for her family, Helen loved to explore the world and traveled to many countries. The picture of her riding a camel in front of the Great Pyramids of Giza, in Egypt is a favorite! She also loved to try out new recipes. She was as comfortable cooking sukiyaki, rouladen, and Wienerschnitzel as she was making a Sunday roast. She had delicious after school snacks waiting each day, when her kids came home from school. She also filled our life with flowers. She usually had fresh flowers in the house and a flower garden in the yard. She could arrange flowers in a European style, but also took Ikebana flower arranging in Japan, and enjoyed the balance and simplicity of those arrangements.

She dressed very fashionably, especially during the 60’s. She would not only have a beautiful dress on, but would also have matching gloves, hat, purse and, of course, lipstick!

Helen was also service oriented. Not only did she care for many widows, she also served at the Red Cross. A favorite time for her, was her weekly service as a volunteer, at the Relief Society building. She also served in many church callings for The Church of Jesus Christ of Latter-day Saints. Her callings included President (as well as in the presidency) of the Primary, Young Women, and Relief Society organizations. And it would be hard to count the number of servicemen and missionaries that she fed.

She was referred to as the “social chairman” in our family. She was very good with dates and obligations. She also recorded special events, such as births, baptisms, ordinations, and deaths in her journal. If grandchildren needed a date, they could call Grandma and have her look it up in her journal.

She was preceded in death by her parents, her siblings, and her great-grandson, Maxwell William Jackson.

A special thanks to those who gave such loving and dedicated care to Helen, and helped Roger and Mark: Nancy Tarbet, Maddisen Wagner, Brianna White, Marissa Coy and Ashley Olsen

Although she was a good listener, her greatest attribute was that of patience. She has an abiding testimony of Jesus Christ. The world and our lives will ever be enriched by touching hers!

The link to view the funeral services: www.oakhillsward.org

To order memorial trees or send flowers to the family in memory of Helen Virginia Hall Nielson, please visit our flower store.