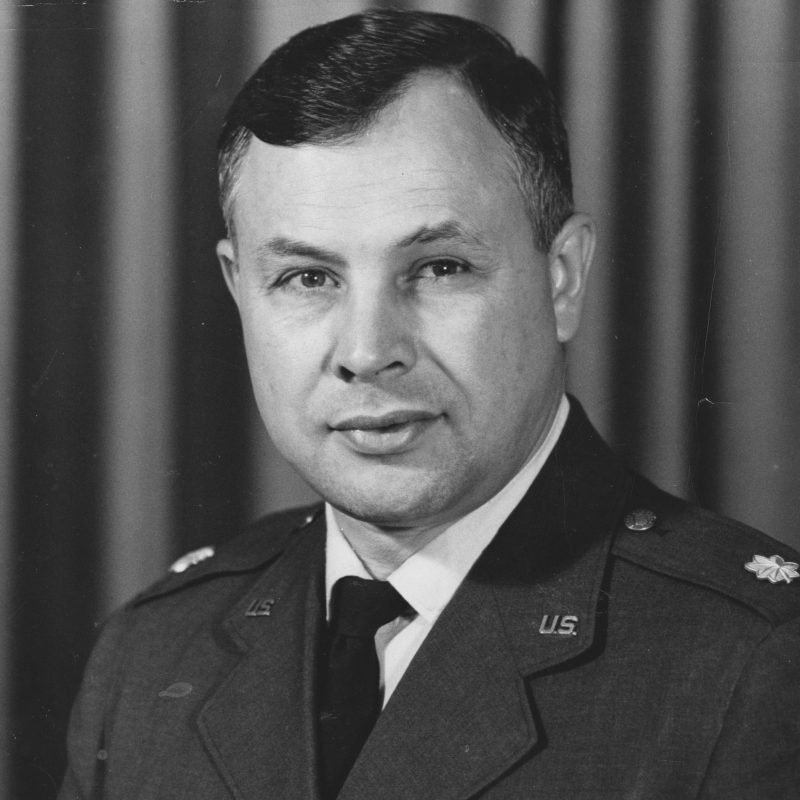 After 93 years of adventure, Col. Wallace Donald Gillespie passed away in his sleep at the George E. Wahlen Ogden Veterans Home. He is missed dearly by his family on Earth but is now reunited with his treasured wife and family in heaven that he longed to be with. Don was born in Tooele, Utah, at the beginning of the Great Depression to Sophronia and John Gillespie. He was the youngest of four children, with two older brothers and one older sister. His father worked as an industrial blacksmith and his mother was a beautiful vocalist. Together with his mother, Don listened to opera on Saturdays and sang to the canaries they kept on the porch. In his final years, Don was often found lying in bed singing to his two cats, who rested their heads on his hands while he sang.

Don was a true athlete, which he attributed to his father. His father was a tremendous runner and could jump from the kitchen floor into the sink with both feet. Don made a name for himself in Tooele through high school football, where he earned the nickname “Square.” His mother and his sister Beverly were his greatest cheerleaders. He was always looking out for the vulnerable and used his athleticism to stand up to school bullies on several occasions. When he wasn’t playing sports or working with his family, he would pick up his friends in his Model T Ford or ride the railroad out to The Great Saltair to go dancing.

Once he finished high school, Don played college football on scholarship at Brigham Young University, West Point Academy, and Utah State University. He changed schools because he felt restless. But when he met his beloved wife Ila at Utah State, the restlessness dissolved. Ila was reading a newspaper the first time he saw her. He waited for her to stop reading but she never did. Finally, he asked her if she was going to read that newspaper all night. She stopped reading and they went out on a date. They were inseparable from that point on. Ila and Don were married in the Salt Lake Temple on August 31, 1953.

Don graduated with a BS in industrial education from Utah State University in 1953, and later a BS in electronic engineering from the University of Missouri in 1965 and an MBA from Western New England College in 1977. After a season-ending injury at Utah State, Don joined the United States Air Force. His career in the Air Force began in 1954 as an intelligence officer for the Air Force Security Service. He was later recruited to join an elite covert force that gathered classified undercover intelligence in Vietnam. He climbed waterfalls, ate snakes, and fought for his life in the jungle. It was a time he never liked to speak about.

Through his military service, he moved and traveled with Ila all across the United States and the world, eventually reaching the rank of Colonel. Ila loved the adventure and would always ask him “Where are we going next, Don?” After nearly ten years of marriage and several miscarriages, Ila finally gave birth to their first son Barry in 1962. After Barry, the children came easily, with Nicole, Rex, and Jada following soon after. Don loved his babies and comforted them in the night, even after working long hours during the day. He often mused that “There is nothing in the world better than babies.”

Later in his Air Force career, the entire family moved from Massachusetts to Turkey. They explored and camped in the Middle East via a Volkswagen bus. Afterward, he worked at the White House Communications Agency under President Nixon, where he was recognized with several awards for his service. He later served as the director of Space and Satellite Communications Systems until he retired and joined the public sector. In retirement, he continued traveling with Ila to places like China and Mexico and to visit their beloved children and grandchildren. When he was home in Kaysville, Utah, he maintained the condo pool, which was a cherished gathering space for his family for many years.

Don had a strong testimony of The Church of Jesus Christ of Latter-Day Saints, which gave him hope of seeing his wife Ila again after she passed in 2014. He often spoke of Ila and other family members who had passed paying him spiritual visits in his final years. He missed them very much. He outlived most of his older family members, which surprised him. He often said “I don’t know how I lived to be this old—I just did.” His children, grandchildren, and great-grandchildren were grateful for his long life. Don was an anchor and a comfort to his family up until the very end. He was always generous with support and reassurance, and everyone who knew him benefited from his stalwart soul and tender heart.

Interment will be at Kaysville City Cemetery at 1:00 p.m.

For those wishing to attend virtually, the service will be streamed live at 11:00 am on Russon Mortuary and Crematory Facebook Page using the following link: https://www.facebook.com/watch/russonmortuary/

Services will also be streamed under this obituary beginning at 11:00 am on Thursday.

To order memorial trees or send flowers to the family in memory of Col. Wallace Donald Gillespie, please visit our flower store.